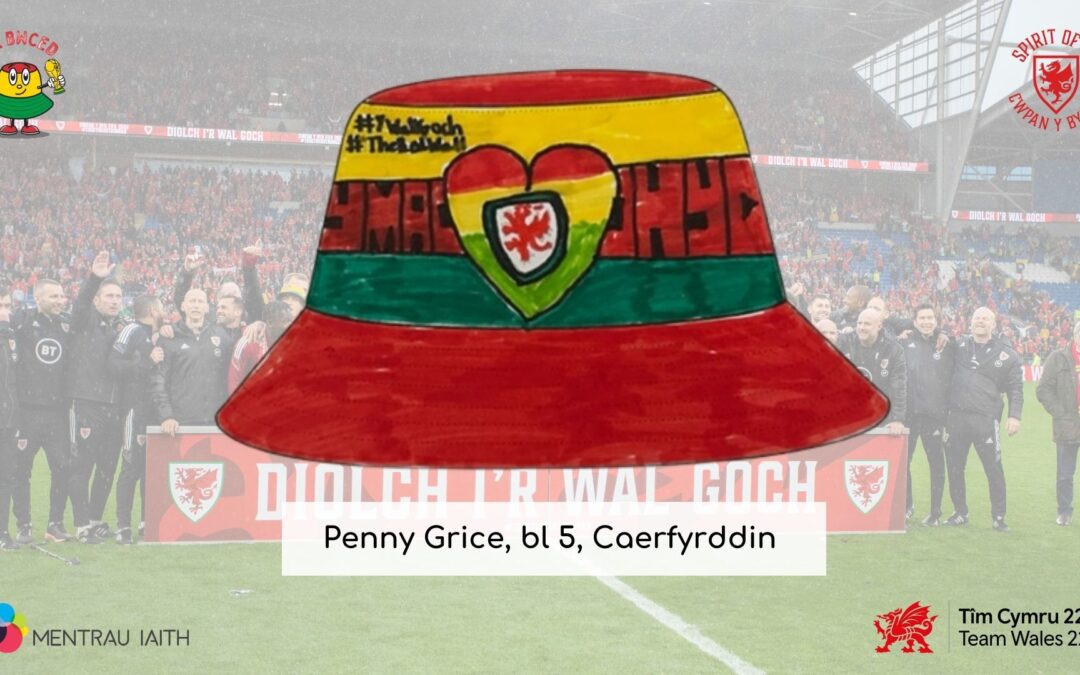 More than 5,400 children took part in the Mentrau Iaith’s bucket hat design competition. The Mentrau Iaith would like to thank all the children, their parents and schools for competing!

Early October the Mentrau Iaith launched the competition for children and teenagers under 18 with the opportunity to win a set of bucket hats for the whole class including the winner’s design. The adjudicators were Sioned Dafydd (popular Welsh language football pundit), Geraint Løvgreen (member of the Wal Goch / Red Wall) and Tim Williams (bucket hat inspiration, founder of company Spirit of ’58).

“We were absolutely spoiled to receive so many bucket hats designs! We had some work to do deciding which ones were the best” says Sioned Dafydd: “The response has been amazing. More than 5,000 bucket hats – we didn’t expect to get so many to be honest! Fantastic!”

The winner is Penny Grice from Carmarthen. The 3 other designs that reached the top were created by Zakia Johnson from Ammanford, Lili Wen from Ruthin and Ifan Midwood from Morfa Nefyn.

Geraint Løvgreen said in his adjudication:

“We really like the colours and the words ‘Yma o Hyd’ going around the band in the centre. And the heart with the Cymru badge in its centre is also fantastic. The standard of the competition was really high. There is certainly no shortage of young talented designers in Wales. We are delighted with the 4 hats. Each of them could win and I would be very happy with that.”

Penny and her classmates will get a set of bucket hats with Penny’s design on them. As a bonus the Football Association of Wales invites Penny to watch a training session of the Welsh football team in the spring.

Zakia, Lili Wen and Ifan will receive a gift from the Spirit of ’58 shop as their prize.

“We would like to give the children the opportunity to see their hats shown in other places. They really deserve the praise” says Daniela Schlick, Mentrau Iaith Cymru. The Mentrau Iaith will produce a series of videos with more pictures of the bucket hats to show the wide variety of designs and to thank the children again for being so enthusiastic in taking part.

The network of the Mentrau Iaith is one of the key partners in the Welsh Government’s World Cup Partnership campaign. The Mentrau are organising a variety of exciting activities to celebrate the Welsh football team and their success reaching the World Cup in Qatar this year.