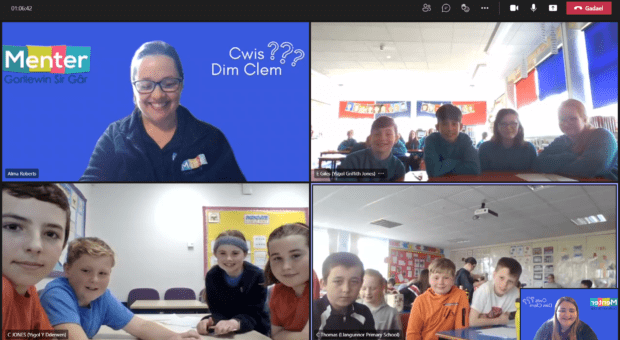 Last week (07-11/06/2021) pupils from primary schools across Wales were taking part in the final, national round of Cwis Dim Clem for the first time ever.

Cwis Dim Clem (No Idea Quiz) is a fun Welsh language quiz for year 6 pupils in Welsh primary schools, having started in Carmarthenshire in 2015. Since then, the quiz has grown to other counties in the South West with regional rounds. This year the quiz was held nationally for the first time, with 17 schools from North, South, East and West Wales competing in the final round to be crowned Cwis Dim Clem 2021 champions.

“I have enjoyed very much learning about the country I live in and its history.”

The Cwis was well received across Wales with many schools excited to be competing for the first time. One of these schools is Ysgol Gwaun Gynfi, Deiniolen representing Hunaniaith –Menter Iaith Gwynedd in the final.

“The kids have really enjoyed taking part in Cwis Dim Clem. It was a pleasure to see everyone with a big smile on their faces this afternoon as the team shared their experience with the rest of the class. It’s been such a flat year for the children, so it was lovely to have such a buzz back in the school.”

“This is the first time Menter Maldwyn has held Cwis Dim Clem. Every one of the 14 Welsh medium and Welsh stream primaries in the area took part, 307 pupils, for the first time this year. It was lovely to see everyone so excited to take part and they can’t wait to compete again next year!”

The winners will be announced in a special online meeting with all the finalists joined by Owain Williams, presenter of ‘Stwnsh Sadwrn’, S4C children’s tv show.

Cwis Dim Claim gives the opportunity for children to enjoy using Welsh in a fun atmosphere outside of their lessons.

“We’re very happy to be able to hold a national Cwis Dim Clem this year for the first time ever. It’s a fantastic opportunity for kids to enjoy the language paired with the excitement of the competition. We want to see year 6 children build relationships with their new friends and peers through the medium of Welsh, giving them confidence to continue socialising in Welsh when they move up to the ‘big school’ in September.”

The schools through to the final round are: