To celebrate the wealth of Welsh language music on February 9th, the Welsh language initiatives will showcase the quiet heroes of the Welsh music scene, from emerging artist and gig organisers to school DJs.

Mentrau Iaith Cymru, an umbrella organisation who support the 22 Mentrau Iaith (Welsh language initiatives) across Wales wanted to celebrate not only the musicians and artists at the top of the pile, but those who are the backbone of the scene in our local communities.

“I’ve been playing the piano and the guitar for a while but was never confident enough to write songs myself and perform them. Through the workshops with Mei Gwynedd I learnt a lot and have formed a band with my friends. We really enjoy playing music together and writing our own songs.”

According to Ethan, the local Menter Iaith supports the Welsh language music scene in many ways. He says;

Menter Rhondda Cynon Taf have also recently taken up a radio show with GTFM every Sunday Night from 8-10pm. Gwyndaf Lewis, who works for the Menter Iaith and presents the show, says;

“GTFM is a very popular digital radio in the local area and we thought it would be a great platform to showcase Welsh language music. The radio were very supportive of having a Welsh language show and we’re really greatful that they have offered us this platform to show listeners that there’s more to Welsh music than male voice choirs!” 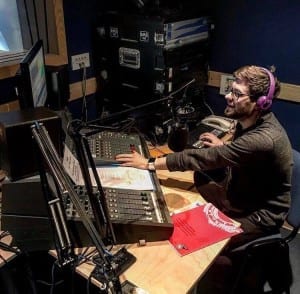