23 giant footballs with over 20,000 messages and signatures of support presented to the Wales Football Team

Last night in a special charity send off dinner for the Wales Team, the Mentrau Iaith (Welsh Language Initiatives) presented 23 giant footballs to Ashley Williams, Gareth Bale and Andy King on behalf of the Wales Team. The giant footballs have been touring the whole of Wales as part of the Mentrau Iaith’s campaign to call upon supporters to send their messages of support and pass the ball to the next supporter.

With over 20,000 signatures and messages written in Welsh, the footballs were lined up alongside the red carpet that welcomed the guests to the evening.

“I would like to say thank you on behalf of the team to all who’ve signed the footballs. Receiving messages like this from across Wales gives us a huge boost.”

“We would like to thank the Mentrau Iaith for collecting this support. It always helps us knowing that we’ve so much support throughout Wales. Diolch Cymru.”

“Seeing Wales succeed in any sport is always a boost to our confidence and helps raise our profile internationally. The Wales Football Team and the FAW have done so much over the past few months to put Wales and the Welsh Language firmly on the map, to an extent that we haven’t witnessed before.”

“Our message, in collecting the support was a simple one, to encourage supporters to consider learning and using whatever Welsh they have whilst supporting Wales in the Euros this year. Symbolically the action of passing the ball to the next supporter to show support and ensure success is one we can apply to the Welsh Language and its future. If more of us learn and pass the Welsh Language on to the next person, the language will become a part of all of our lives.”

A series of videos and clips of communities across Wales signing their support will be released during the tournament that will call upon fans to chant C’mon Cymru this summer. 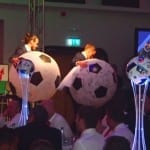 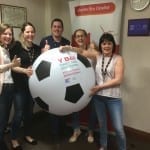 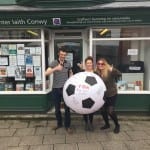 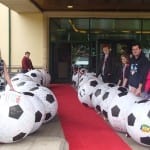 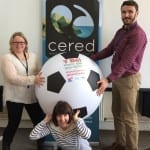 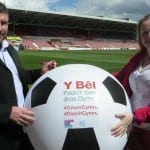